Do captions make a difference?

For the most part, I would say 90 percent of those I follow provide informational captions, identifying what is in the photo, or maybe adding a few hashtags. So I’ve wondered — do captions make a difference?

Those who delve into more storytelling generally garner a greater response from their followers.

But the single thing that makes the most difference (in my opinion), is an acknowledgment to any comments that are made.

@Sensastone is in Sweden, and he has become one of my favorite friends on Instagram. We have some really great conversations about the world and the forces at play, whether environmental, political or otherwise. He has fewer than 3,000 followers today, but here is something amazing — the center picture above has 688 likes and 216 comments, which is phenomenal engagement. He responds to comments in such a thoughtful way, it blows me away sometimes. In fact, his engagement was so epic that I realized I needed to something to change up the way I was sharing.

Here is the caption and hashtags that accompanied the center photo:

My wonderful daughter-in-law, @queenhorsfall, along with the next three people are hugely successful influencers on Instagram. @queenhorsfall has more than 60,000 followers. She, along with @ryanintheus, @helloterumi, and @shilpiboseofficial collaborate with sponsors in various capacities.

In addition to posting sponsored or personal content, @queenhorsfall consistently posts Instagram stories and they are available to view in the category circles you see on her profile. (Examples above: Cooking, Apps, Malta, 2 Days, Sale Alert, Netherlands, Shop, etc.)

Captions are necessary when posting content that has been sponsored by a company or entity and in the U.S., are required by the FTC. (Federal Trade Commission) 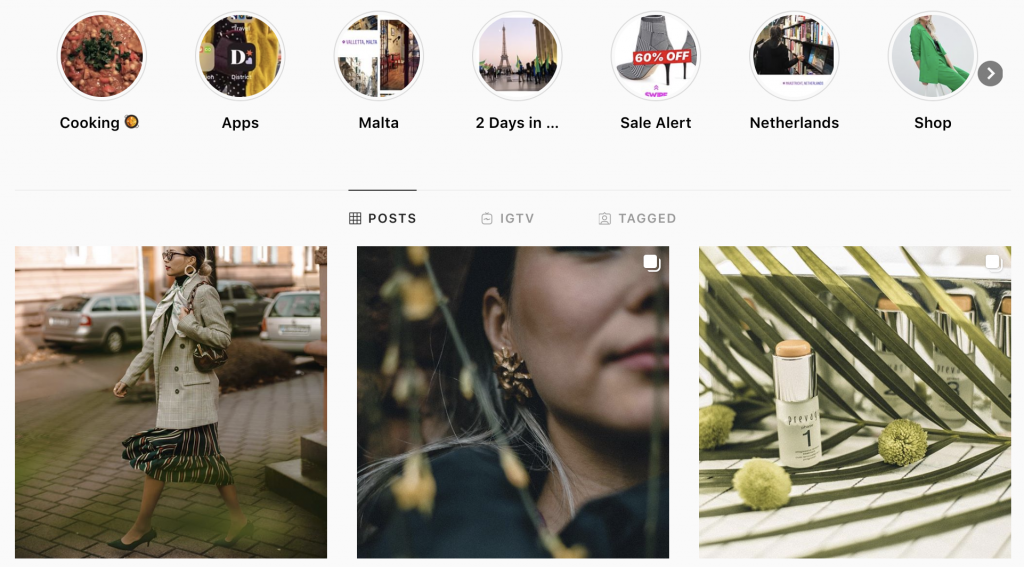 @queenhorsfall will sometimes write an extended caption and enjoys tons of positive feedback no matter what she shares. In this instance, she received 3,243 likes and there are 73 comments on this post. The caption and hashtags that accompanied it:

Seattle via Australia friend, @ryanintheus tells epic stories on his Instagram, and his case, captions make a difference.  Also, note the small black circle in the lower left corner of the image below because it signifies he has tagged a person (or persons) in the post. He received 1,949 likes and 182 comments. The #sponsored hashtag means he has posted this in collaboration with a sponsor. 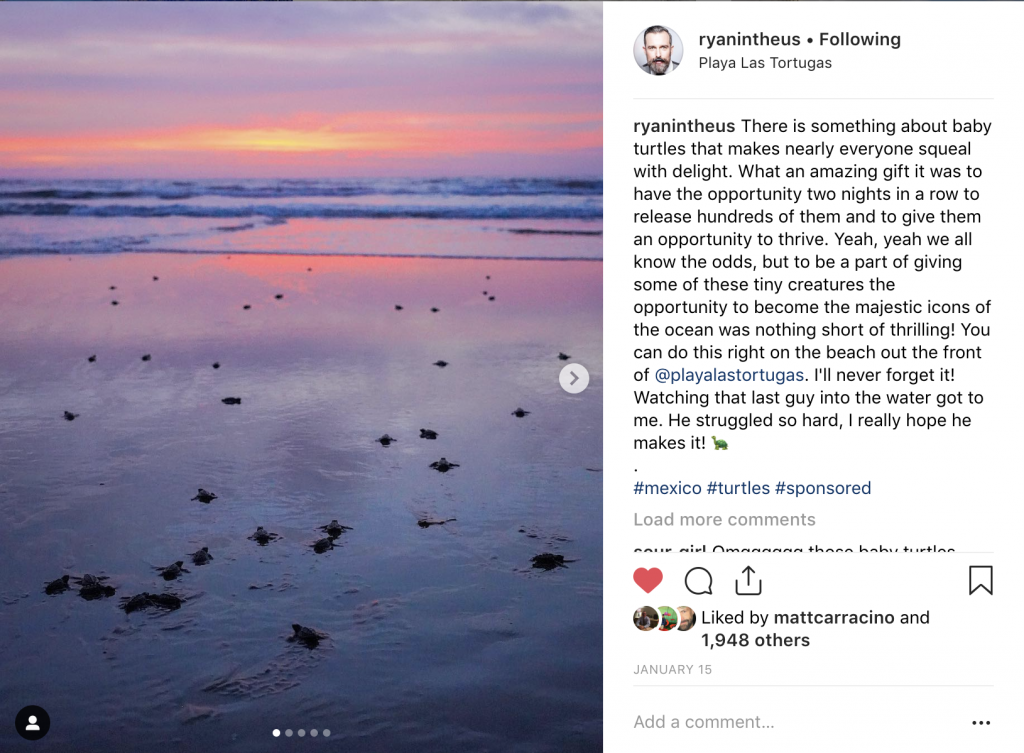 Note: when viewing Instagram on the web, you can hover over an image to quickly view the likes and number of comments, as shown below. This is a post by Ryan that had amazing engagement. It appeared with the italicized caption below it. 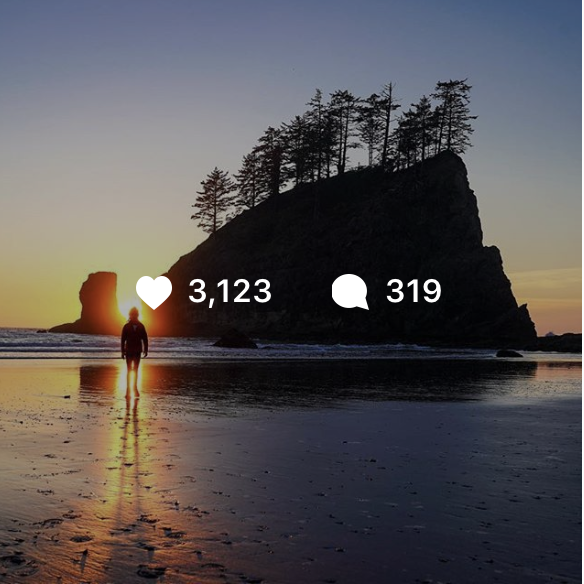 Excerpt: A lot of people talk to me about the importance of the father, daughter relationship given I’m a single dad with 50% custody of a seven and a half year old daughter. As they should. With all that’s going on in the world, more than ever we need dads to be modeling to their daughters what a real man looks like, so that when they grow up, they know what to look for… (For complete post, click here.)

Another Seattle friend, @helloterumi, below shares a sponsored post for Fage yogurt. Terumi and I have partnered with #VerizonWireless as #brandpartners. On the post below, she received 423 likes and 32 comments, which I’m sure will make Fage happy because of the engagement, and also the earned media this mention adds to the share.

The FTC has pressured companies who partner with social media influencers to ensure their content is labeled as an ad, promotion or otherwise sponsored post. Note the first hashtag in her caption below. 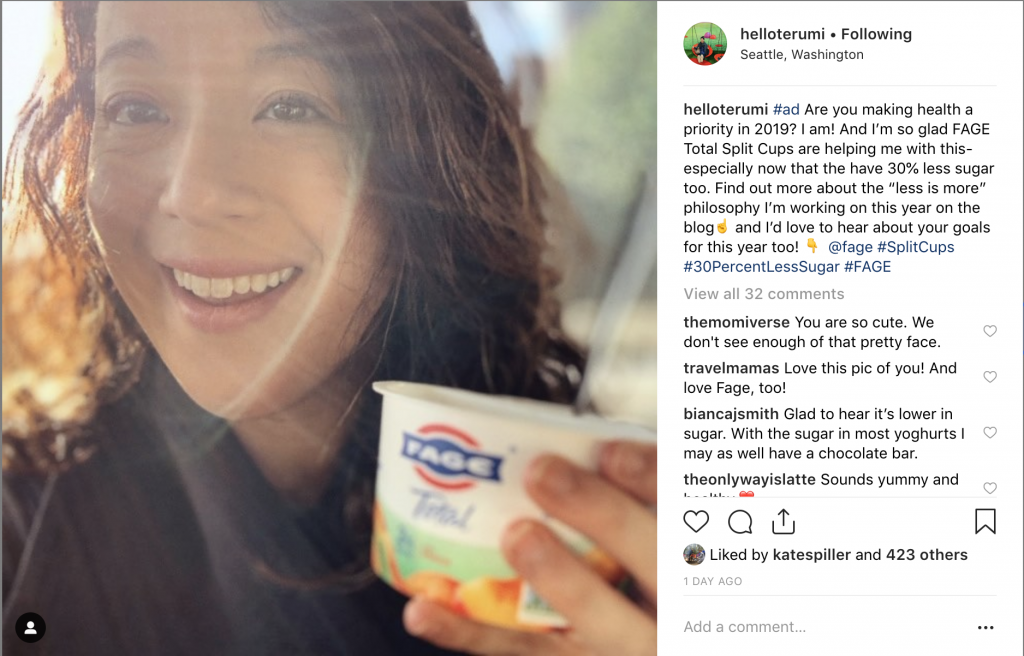 #ad Are you making health a priority in 2019? I am! And I’m so glad FAGE Total Split Cups are helping me with this-especially now that the have 30% less sugar too. Find out more about the “less is more” philosophy I’m working on this year on the blog☝️and I’d love to hear about your goals for this year too! 👇 @fage #SplitCups#30PercentLessSugar #FAGE

The final example is @shilpiboseofficial. Shilpi and I have been friends on Twitter for more than 10 years. Shilpi is and has always been a beautiful woman, mother, wife, and friend. Who knew she would become “Mrs. India!” Since then, her  Instagram feed grew so significant that there was a need to create an offshoot account for her fans. 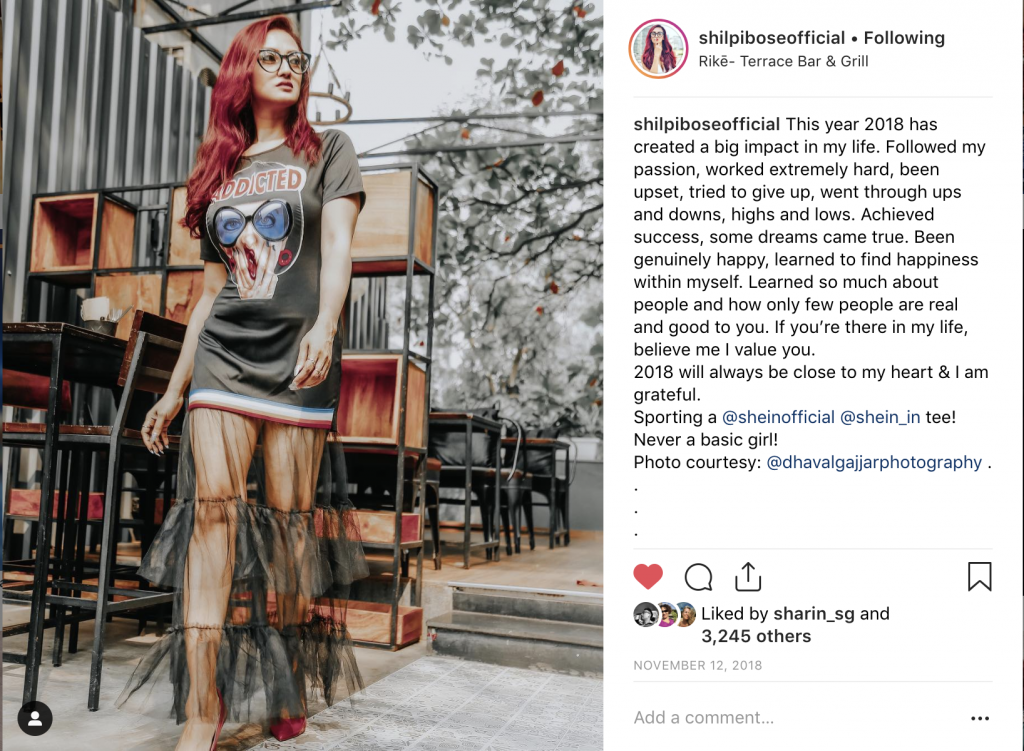 This year 2018 has created a big impact in my life. Followed my passion, worked extremely hard, been upset, tried to give up, went through ups and downs, highs and lows. Achieved success, some dreams came true. Been genuinely happy, learned to find happiness within myself. Learned so much about people and how only few people are real and good to you. If you’re there in my life, believe me I value you.
2018 will always be close to my heart & I am grateful.
Sporting a @sheinofficial @shein_in tee! Never a basic girl!
Photo courtesy: @dhavalgajjarphotography .

To caption or not caption?

Since I began posting extended captions to my instagram posts, my engagement has increased ten-fold. I attribute the increase to a couple of things:

So for me, captions make a difference.

In many cases, micro influencers who are being compensated in some fashion have received suggestions regarding possible content points to make in a given post. Sponsored content will often read more “ad-like” than a personal post. @RyanintheUS is definitely exceptional!

I’ll often have no idea of exactly what I will say when I post on Instagram, but I try to tell a story where the images are there to draw in viewers. The images don’t necessarily relate directly to the captions. I line up the photos (usually I post 2 or more photos in a series), then write on the fly.

It has been great for me, but it can take a while and probably won’t work for everyone.  It would likely be easier if I composed the caption in a text document, then pasted it into Instagram.

But if you make a note of @sensastone’s very brief caption that perfectly reflects his personality and sense of humor, you’ll see you don’t need to write a novella. At the very least, take a moment to say SOMETHING about your images. It provides insights to viewers about what they are viewing!

Most important advice in captioning: be genuine.